Added to your basket

Sorry, there seems to have been an error. Please try again.
Product Name

Subtotal: ( items in your basket)

Sorry, unfortunately this product is currently out of stock 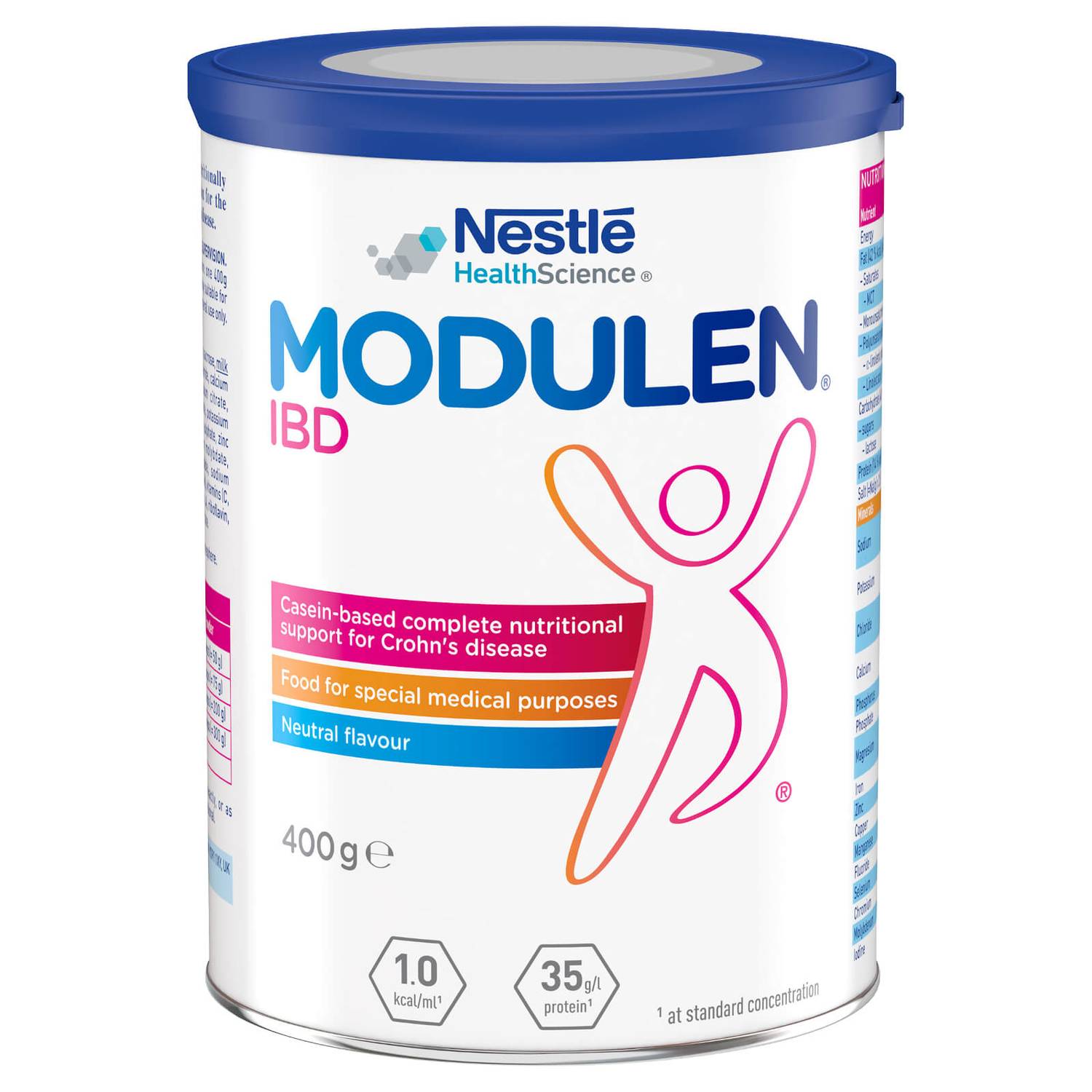 This product originates from the UK and is shipped from the UK. Duties and Fees are included in prices for most shipping destinations.

No code needed, offer will automatically apply at basket!

Exclusions apply, valid for a limited time only.

* This nutritional product is intended for use under medical supervision.

Modulen IBD is a unique whole-protein, powdered formulation for the dietary management of the active phase of Crohn’s disease to be used for nutritional support or as a sole source of nutrition, as either an oral sip feed or for administration via a tube feed.

Modulen IBD is 100% casein-based, supplemented with optimal levels of lipids and carbohydrates with a low osmolality level for good tolerance and great taste.

Modulen is a Food for Special Medical Purposes to be used under medical supervision. Your GP will be able to advise whether it’s suitable for your individual needs.

Crohn’s disease is a form of inflammatory bowel disease (IBD) that causes inflammation of the digestive system. It can lead to pain, redness and swelling, but it’s not an infectious condition.

The symptoms of Crohn’s disease can include:

Modulen IBD is designed to be used during the remission phase of Crohn’s disease, which is the name given to periods when no symptoms are present. The condition can fluctuate between periods of symptoms and no symptoms.

IBD has been shown to:

Modulen IBD is also suitable for use as the Partial Enteral Nutrition in combination with the Crohn's Disease Exclusion Diet (CDED). The CDED is a whole food diet coupled with partial enteral nutrition (PEN) designed to reduce exposure to dietary components hypothesised to negatively affect the microbiome, intestinal barrier and innate immunity.

One 400g MODULEN® IBD tin provides 2000 kcal. The dosage of MODULEN® IBD is dependent on the age, weight and clinical condition of the patient.

How long will it take to arrive?

Every Health operates out of two warehouses in the UK & US. As a result, some orders require two deliveries. You will only be charged one fee for your delivery.

Please visit our International delivery page for international shipping information, based on your location.

If I'm not completely happy with my item?

How can I track my order?

You will receive an email once your item is shipped. You can also track your order and individual items here. Please allow 10 working days from the order shipment date before notifying us of any delays with your delivery.

Where reviews refer to foods or cosmetic products, results may vary from person to person.
Customer reviews are independent and do not represent the views of Every Health.

Tastes great, easy to prepare and helps me to maintain and add weight and stay healthy.

This product is great for supporting Chrons. The box was well packaged and delivered on time. Definitely recommend it!

The nutritional product is really good and helpful for long term sustainability. The powder is packed in a good box and easy to transport. Delivery times are spot on!

I have ordered this product twice. The first order came quicker than expected. The tins were a bit distorted but didn’t affect the content inside.  It is a good product for Crohn patients who require nutrition. The price is great as well.

You are now signed up to our email.
Add code: WELCOME20 to your basket for 20% off your first order. You will need to log in to your account, so remember this code!

Not a valid email!

Please double check the email you have entered!

There was an error please try again.

You are already signed up to our email!